Prone – Own Who You Are

Painted and sculpted millions of times, the almighty Durga has adorned many spaces. Yet this one deity means something different through each of these artwork. Let’s understand Durga through frescoes.

Fresco, derived from its Italian heritage, means fresh. Hence, easily understood, fresco is the technique of directly painting onto freshly laid plasters on the wall. Through this process, the applied art becomes an integral part of the wall.

Frescoes are different from most of the other art forms as the effect and meaning of the frescoes are strongly affected by the spaces they are in because of a simple reason, that these kind of arts cannot be separated from where they are built and hence, preserve their spatial meanings. Often times, frescoes are found in clusters. They either tell a single story or become a part of multiple stories interlinked with each other. Thus, understanding them without each other can often times become impossible.

Frescoes of Durga in Ellora Caves:

The Ellora caves are found in Maharashtra, India, about 100 kilometers away from the Ajanta Caves. Like the Ajanta Caves, which encapsulate the Jataka tales and life stories of Buddha and other Gods, Ellora caves features some frescoes of Durga that narrates her famous tales, like the one where she killed the Bull-headed demon Mahishasur. 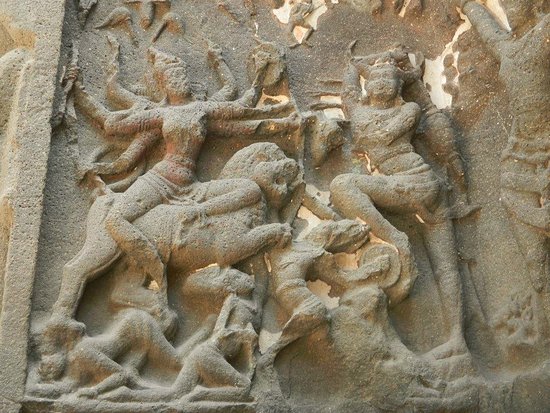 As you can see the same story is depicted in almost a similar way, at different places.

There is a presence of chaos in the background of the main scene – the people fighting and being killed, weapons being drawn out in the air, their feeble and smaller bodies in comparison of the main characters showcasing their lack of power, etc. This clearly portrays who is leading the narrative alongside depicting an action, things are going around, hence, adding to the tension of a war. Mahishasur stands evidently larger in both the versions, yet his body language and the way the light that falls on him, starkly hints that he’s an unequal match in front of Durga’s demeanor. On the other hand, in both of the scenes, Durga looks almost similar. With a rigid and angular pose, a threatening sword, angry lion, all about to splash blood of the demon, we can envision her as a moving entity than a figure. We immediately imagine her fighting fiercely in the battlefield.

The magic of such is frescoes is foretold in their affect, one can easily tell what Durga is to her worshippers without knowing any mythological tales. Durga is powerful, bold and fierce. 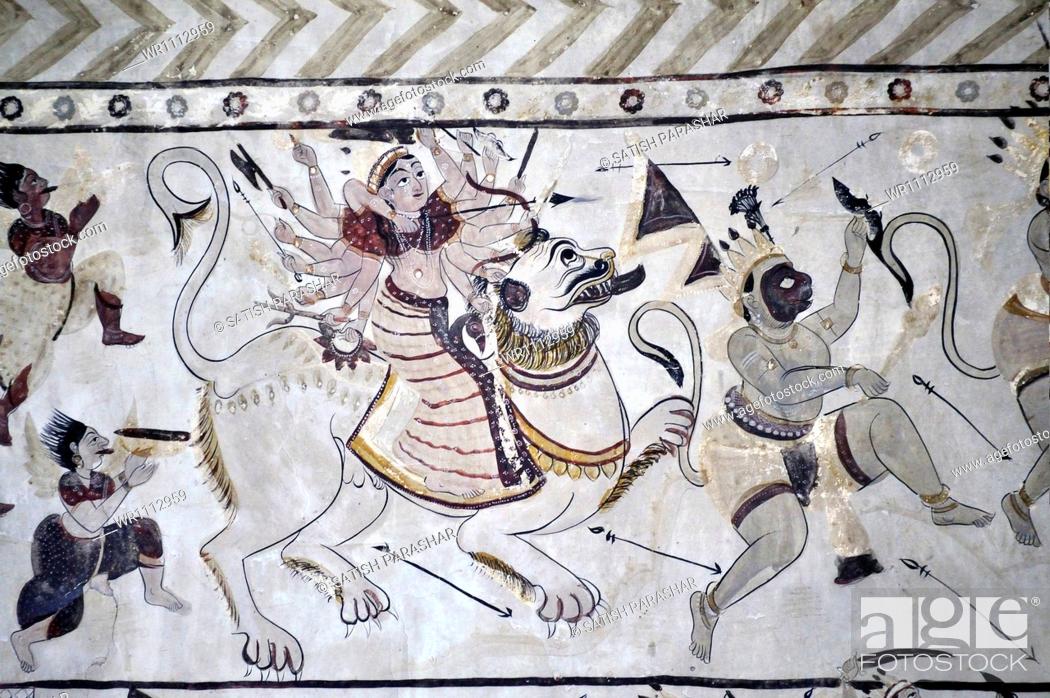 Breaking the monotony from sculpted figures, mural paintings of Durga also narrates alongside the same course. Though interestingly, in this painting, Durga looks much calmer. Yet her serene face does not give away the idea of an unyielding Durga. Similar to the above fresco, even here, her pose remains similar. This might point that the tales were told as such that it lead to a homogenized visualisation even in different art forms and timelines. 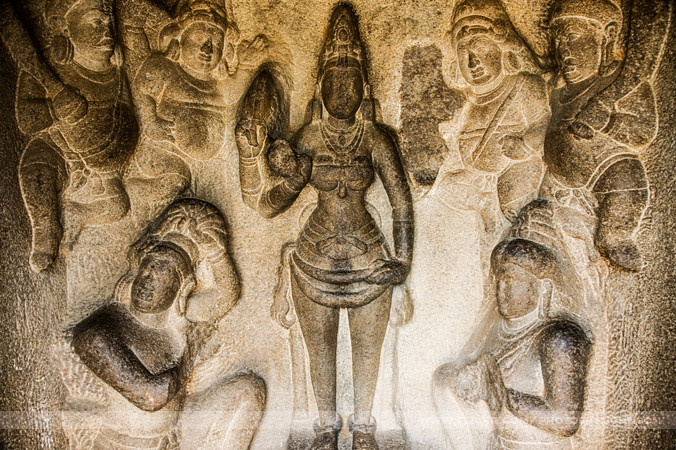 In another version of Durga’s fresco from the Draupadi Rath Mamallapuram Temple, India, Durga appears calmer and in an awake position. Known as the Abhaya Mudra, she is seen blessing her followers who come to worship her in a Sambhaga, standing position. She is seen holding a shankha, a symbol of knowledge, appointed with guards in her court, two of them with swords. This adds to her aura of being the supreme, worthy of devotion. The devotees are also a part of the scene, where you can see two of them bowing in front of the goddess, with the devotee on her left in the process of decapitating themself and the other one, offering their neck to be cut. This denotes the Kapalikas Hindu rites, strengthening the impact of her victory over evil Mahishasur, recounting the mythology.

Hence, through such reenactments of mythological tales in the art forms, stories of religion and glory are nurtured afresh. These practices narrate to the world whom to worship and justifies why we worship who we worship. Again and again through walls. Even walls speak of Durga.

Why Visit Surajkund Mela – The Largest Crafts Fair in the World

The Naked and The Nude Painting of Women; Objectification or Freedom?

Trishita Bhattacharya – A Travel Photographer’s view of the world

Madhav Johri - September 10, 2018
My journey as a travel photographer has been a funny one.  As a kid, my parents used to take my sister and me to...

Busting Relationship Myths – What not to expect when you are...

Pragati Verma - April 27, 2020
In a relationship have you ever found yourself obsessing over things like who texts first or who cares more for the other person? Here are few relationship myths that are probably adding to the anxiety!

Admin - May 28, 2019
https://www.youtube.com/watch?v=SpIjg0PWzHU 'City, Smile' by Ilina Acharya performed live at NEON: A Matinee Special. NEON was a showcase of fifteen independent poets and musicians from across Delhi,...

ABOUT US
Prone is a platform that aims at making people feel comfortable in their own skin accepting their vulnerabilities and chasing their dreams. We promote artists from all lines and love bringing the complicated dynamics of life in the simplest form ever.  Be Prone, Be Alive!
Contact us: writetous@iamprone.com
FOLLOW US
© All Rights Reserved